National Geographic, Nov 17, 2014 (emphasis added): Urchins and cucumbers seemed to have escaped the ill effects of the radiation until now. But in recent weeks, reports have started to come in that they too are dying along beaches in the Pacific Northwest, Hewson said… [He and his team are] studying the urchins and sea cucumbers that are already dying to see if the same killer is responsible.

Dr. Bill Bushing, kelp forest ecologist, Nov 2, 2014: I’ve mentioned before that [in Southern California] our starfish and sea urchins have been dying… I’ve recently seen sea cucumbers that appear to be diseased as well… I’ve also observed strangely colored sea hares (big shell-less snails) in the park. The red algae they normally eat seems to have died out… Divers also report seeing far fewer of the sea hares this year.

Ronald L. Shimek, PhD, marine biologist, Nov 10, 2014: Jan Kocian, diving photographer extraordinare… has been actively surveying several marine subtidal areas in northern Puget Sound for some time… [During a Sept. 18] dive… on Whidbey Island, Washington… he started seeing things he had never previously observed.… there were many animals lying exposed on the sandy sea floor, looking limp, sick or dead. Red sea cucumbers were flaccid and dead… Aleutian Moon snails were in odd postures… pink/yellow worms [were] another rare or unusual sight…. Nuttall’s cockles were on the sediment surface with their siphons out, instead of being buried… 22nd

September, the area containing dying animals was not only still present it was spreading; whatever seemed to be the cause was still doing its dirty work… 25th September [many] red sea cucumbers… were lying fully exposed, and apparently dead… 29th of September… A few living Cucumaria were acting oddly, not quite dead, but just slightly responsive to touch… Numerous green sea urchins were found with their spines in abnormal postures, definitely not looking healthy… The full extent of the dead area, and the reason for the mortality, remain indeterminate.

Posted by Juicing and Raw Foods Sunboy at 8:48 PM No comments: 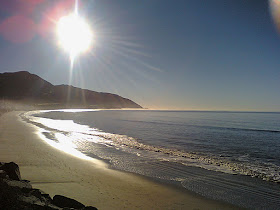 A place where soul surfers keen on ripping up waves and connecting with all that is the ocean, sun, sand, and good hearts.

Search This Blog and Google